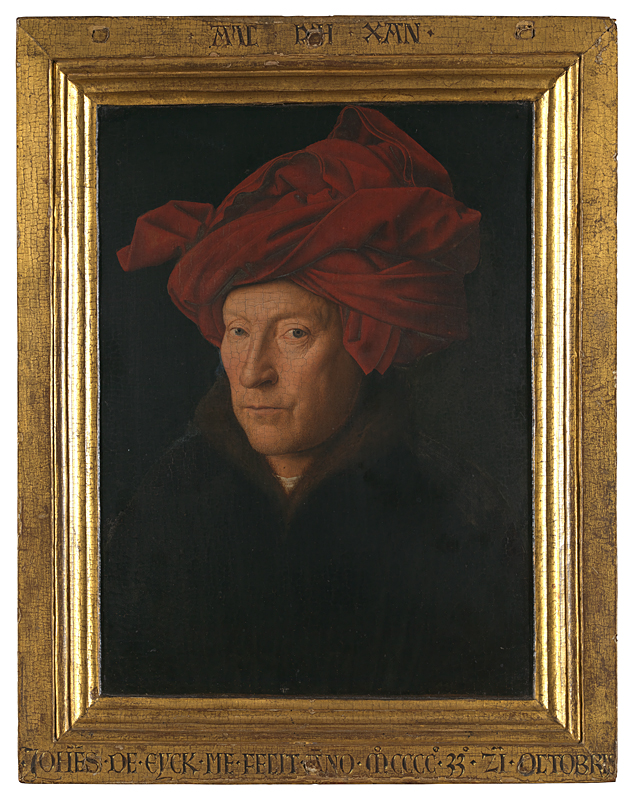 Portrait of a Man (assumed to be a self portrait), 1433. National Gallery London

Jan van Eyck was born in Maaseik, a town in east Belgium, around 1390. He painted for John III the Pitiless, then-ruler of Holland and Hainaut in The Hague, and moved to Lille to work at the court of  Philip the Good, Duke of Burgundy. He then moved to Bruges where he worked until his death in 1441 (Wikipedia). Bruges especially was an economically important and rich region in the 15th century due to its strategic location, patronages and trade; I particularly love seeing the clothing of fashionable 15th century Bruges in Jan van Eyck’s paintings – this is a portrait of his wife: 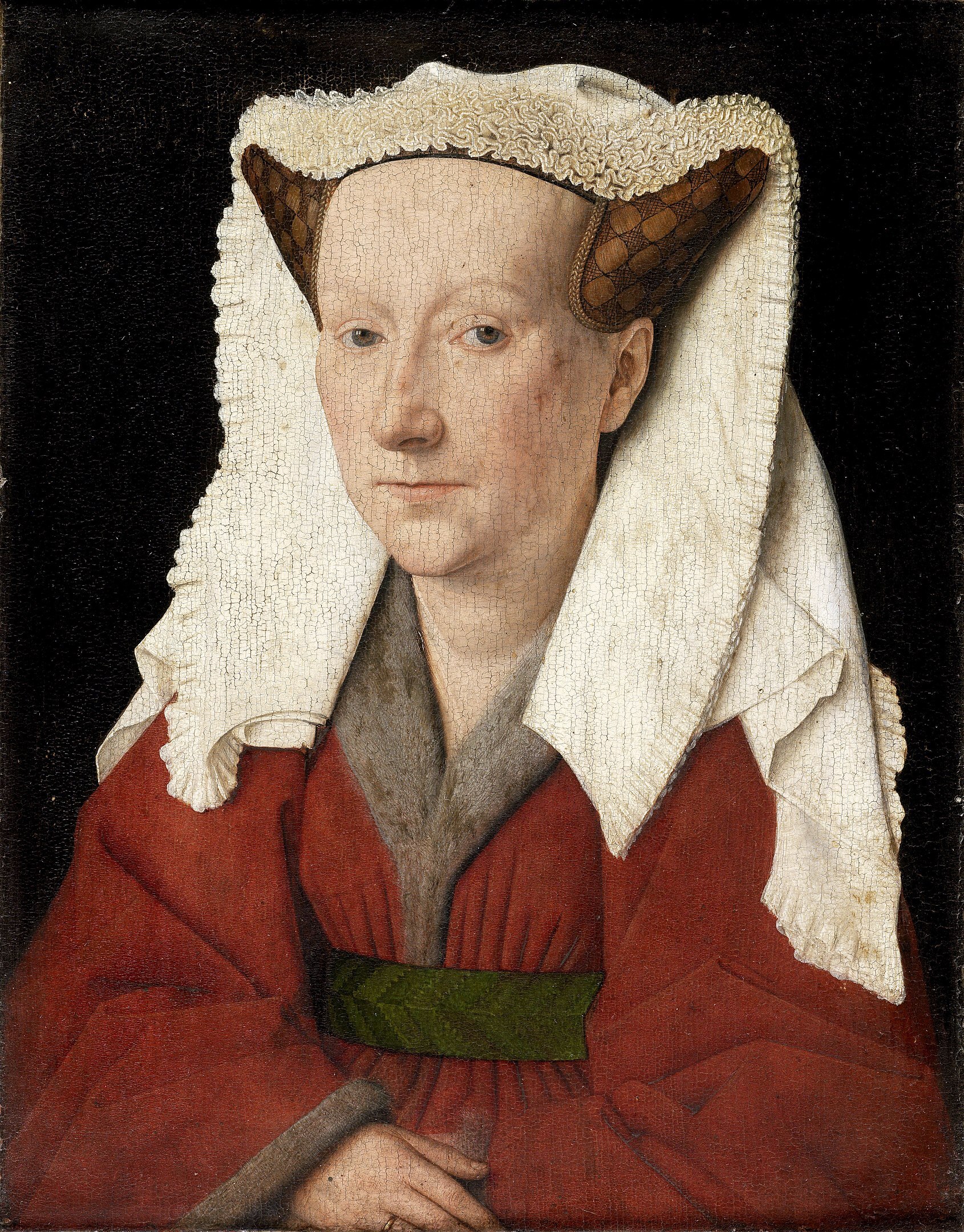 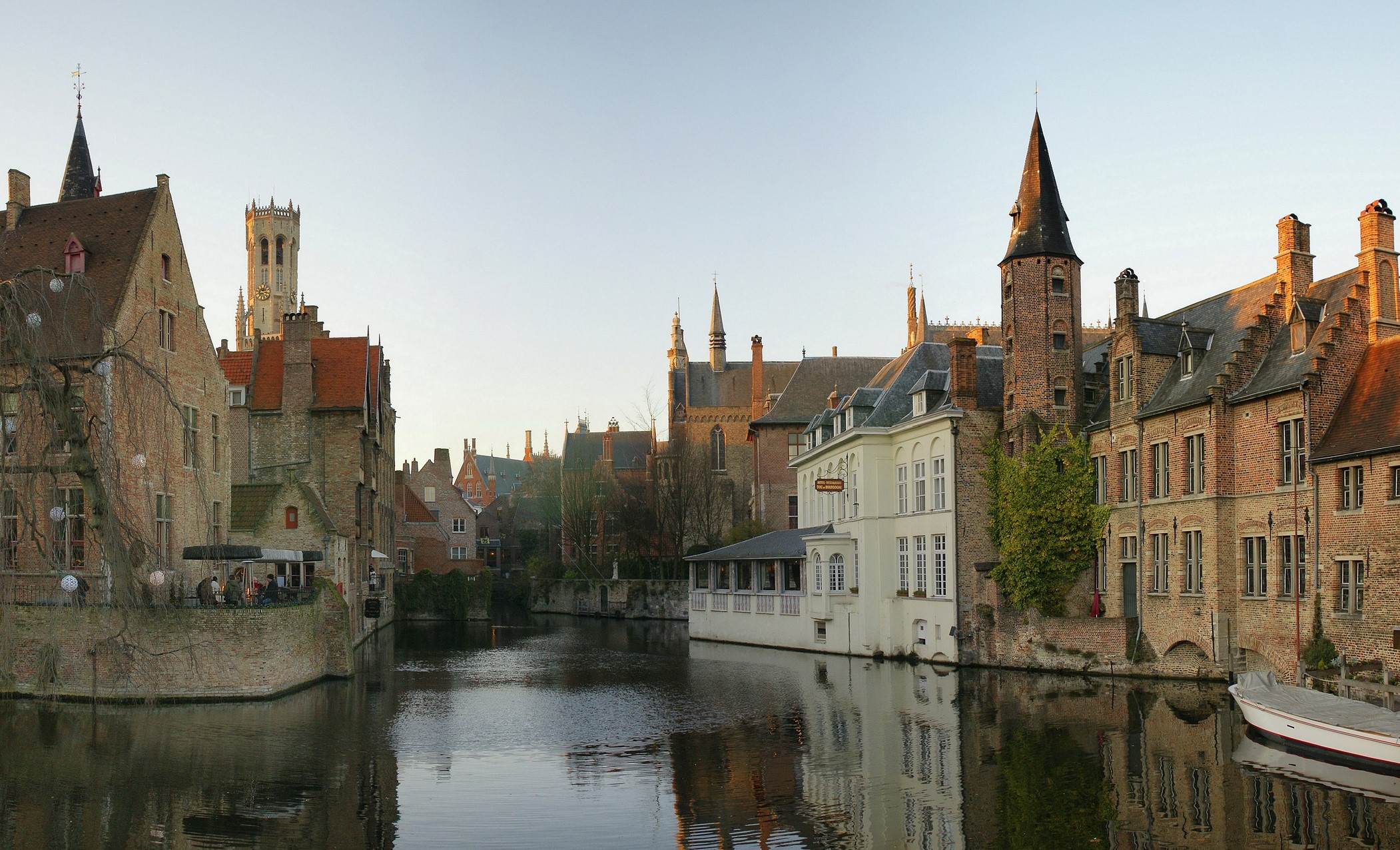 Brugge (Bruges). Not much has changed

Jan van Eyck painted during the Early Renaissance. He was a true innovator and pioneer, making his mark using the new medium of oil paint, and basically kicking off the Northern Renaissance with a new style: objects and figures were painted to look more realistic and three-dimensional and were set within a more convincing space than was seen before this time. His work is of such importance that it has influenced painters throughout the centuries that followed.

Jan van Eyk’s paintings are known for their incredible detail and use of colour. The paintings have a remarkable freshness, even today, which is mind-blowing given these pieces are 600 years old. His painting, in my view, has never been surpassed. The use of colour, bright and at the same time subdued, and the expression of texture, naturalism and realism are nothing short of miraculous. 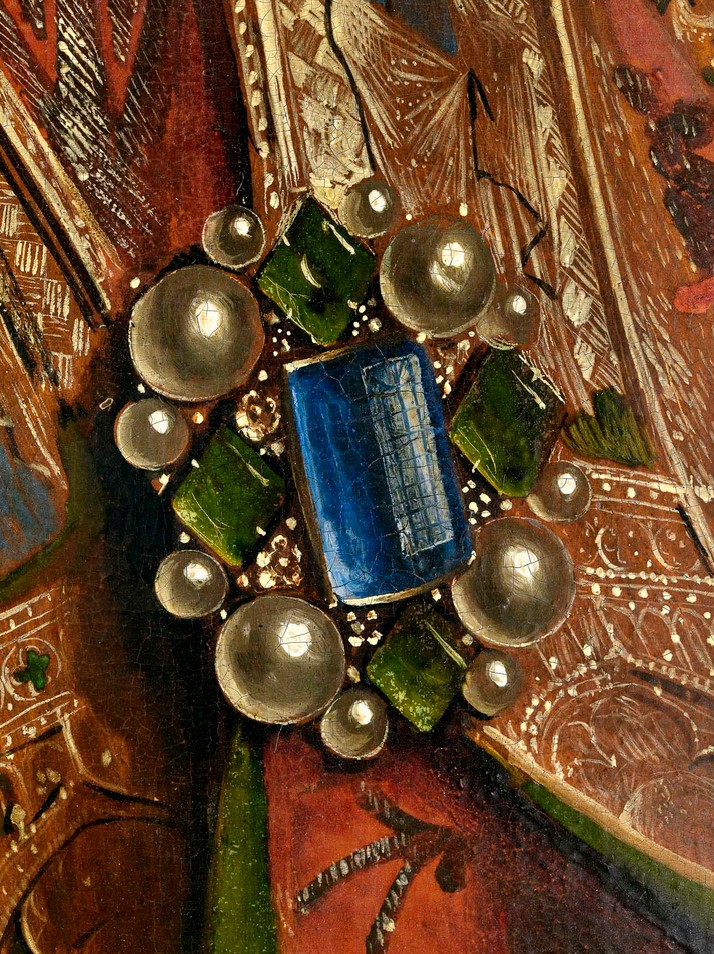 Also remarkable for the 15th century, was that he painted not only religious paintings but also secular portraits – most painters still exclusively painted for the Church. He was able to do this as his patrons made sure he was financially secure.

Around twenty paintings attributed to Jan van Eyck have survived. Among these masterpieces are The Arnolfini Portrait in the National Gallery, London and the Ghent Altarpiece (or Adoration of the Mystic Lamb; Wikipedia). All are incredible when seen close-up. The restoration of the altarpiece was completed in 2019 and the focal point, the face of the Lamb, turned out quite different: it appears that its face had been overpainted in the 16th century. Now the painting has been brought back to its original state, the face of the lamb has an intense gaze and looks fairly ridiculous: see below. 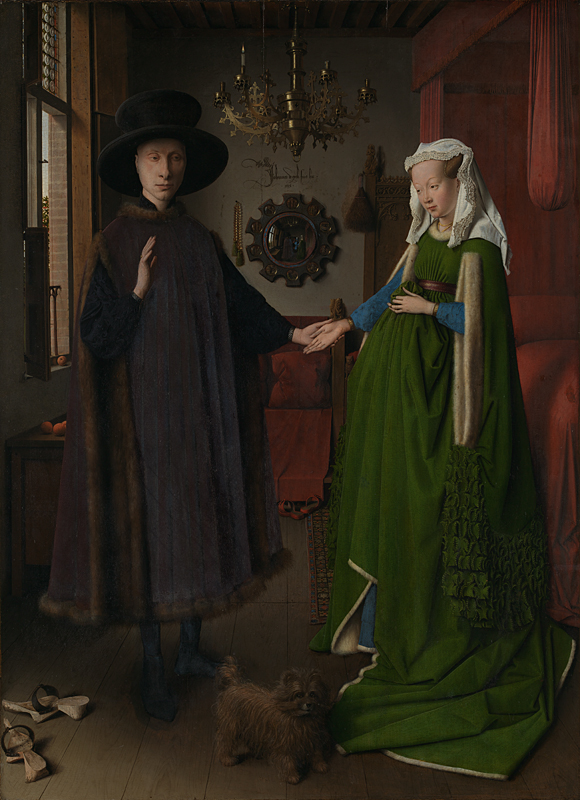 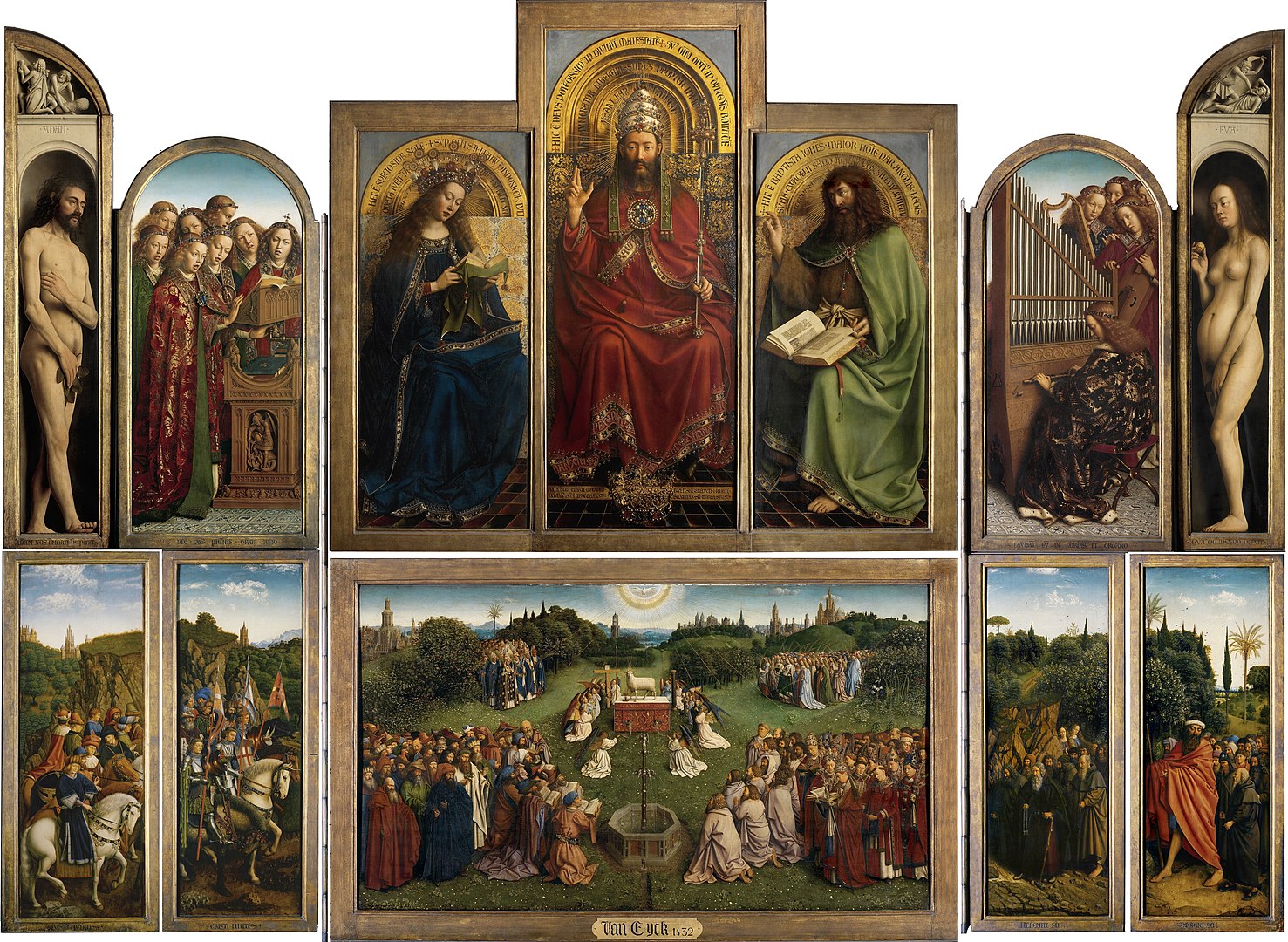 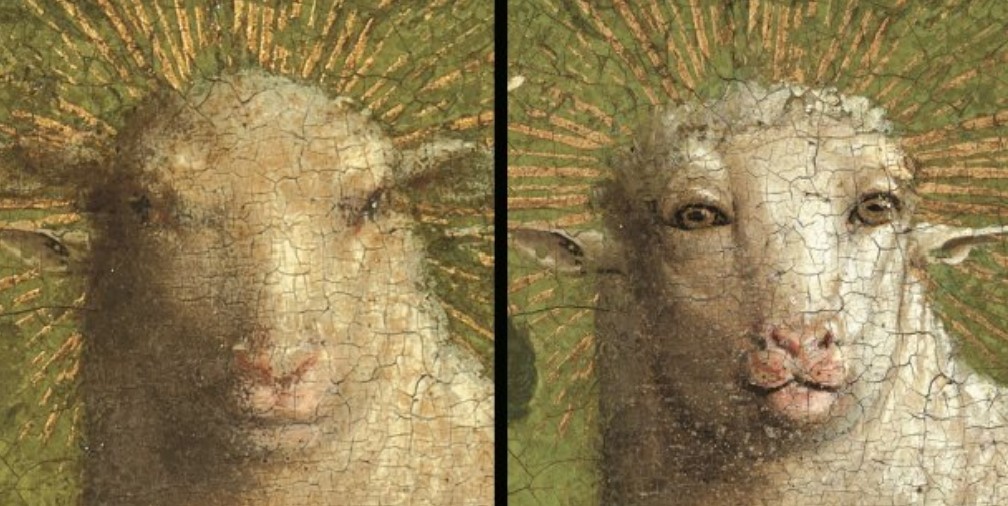 Throughout history, lapis lazuli and the blue pigment that is extracted from it have have occupied a special place in the fine and decorative arts: an expensive, semi-precious stone that for centuries was exclusively sourced fron the rather inaccessible mountains of Badakhshan (today’s Afghanistan). Brought to Europe through the main trading port of Venice, the extracted pigment was known to Europeans as ultramarine (from ‘beyond the sea’). Ultramarine was the most expensive pigment on artists palettes, and long reserved for special passages in a painting such as Mary’s robes. 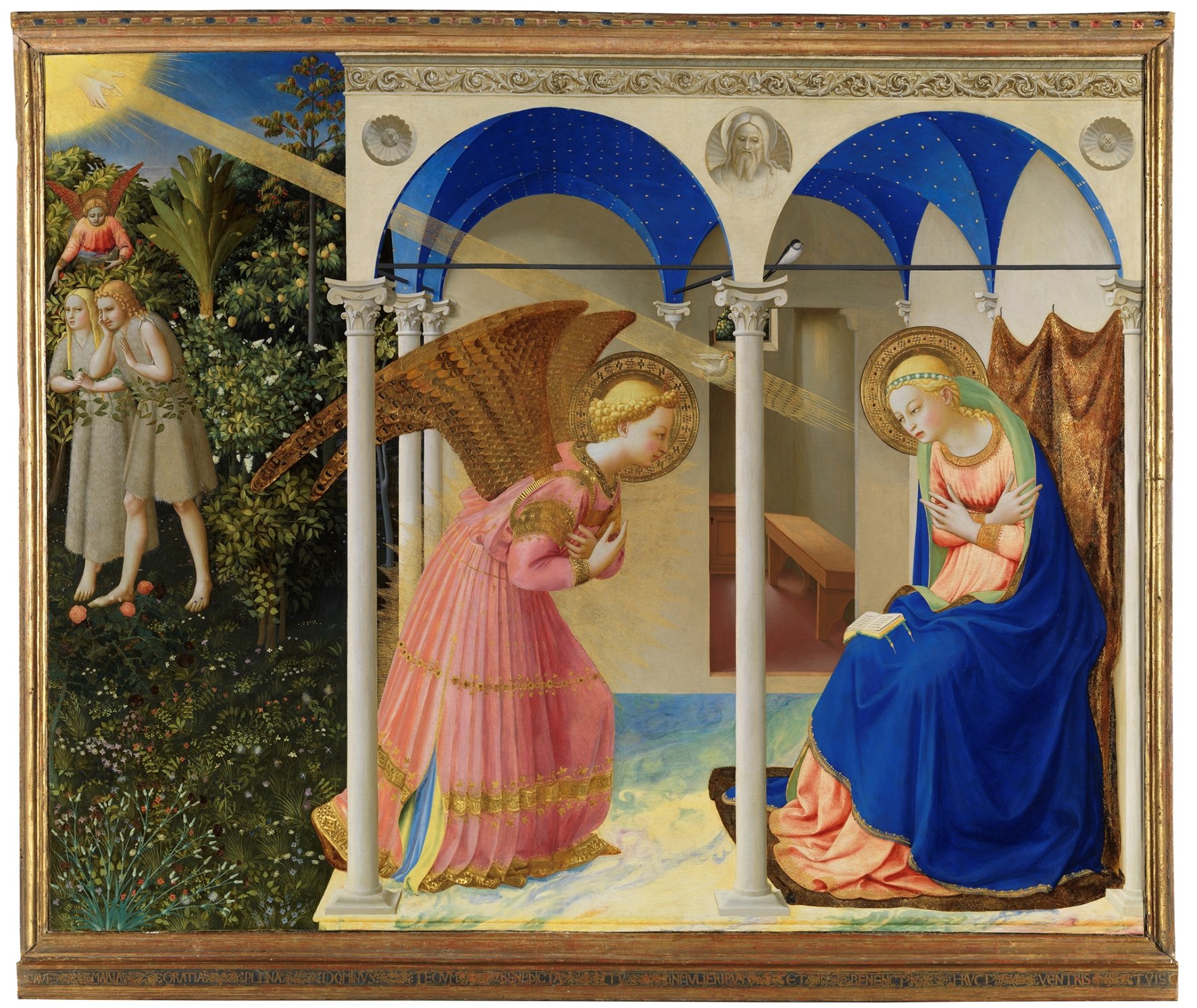 Ultramarine, intensely blue and fine, had no equal as a pigment. When they couldn’t afford this paint, artists used alternatives such as smalt: cobalt-containing ground glass which was a by-product from the ceramics industry. However, smalt was very transparent, coarse and could be prone to fading. Another alternative was copper ore mined in northern Europe, from which azurite (a copper carbonate) was extracted. The best grade azurite was obtained from the largest particles, however this meant that the paint was coarse. The supreme ultramarine was therefore viewed as an extremely luxurious choice and would take paintings to an entirely different level.
The cost of ultramarine was not only due to the cost of mining and transportation into Europe, but also due to a laborious and precise production process by specialised manufacturers, before it was bought by artists. ‘Raw’ lapis lazuli was first separated from other minerals (calcite, quartz and pyrite) by crushing the stones, followed by grinding this to a fine powder and mixing with a paste of wax, pine resin and linseed oil. The resulting waxy dough was kneaded in a lye solution (typically potassim hydroxide) which caused the ultramarine particles to settle in the alkaline water. The first extraction yielded the finest and purest grade of azurite. Subsequent ‘washes’ caused the unwanted minerals to enter the solution, resulting in a less pure azurite. The last and least pure extract was known as ultramarine ash which had a grey colour. Artists did use all grades; some contemporary paint mix recipes mention ‘ash’, for example in Beurs’s “De groote waereld in ‘t kleen geschildert” published in 1692. The price of good quality ultramarine comes to no surprise when it comprises less than 1% of the weight of the original material. Ultramarine was therefore by far the most expensive pigment on the palette of Medieval, Renaissance and post-Renaissance painters. 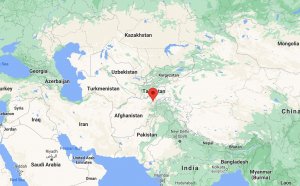 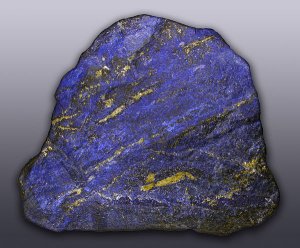 Some painters fully exploited this luxury status of ultamarine. Willem van Aelst (1627-1683), one of the most influential painters of the Dutch Golden Age, had many wealthy patrons and customers. Knowing the value and perceived value of fine ultramarine, he used it to paint significant areas of his paintings and even the preparatory layers of the painting which would be overpainted (underpainting). This approach ensured a huge intrinsic value that would be understood and appreciated by a wealthy 17th century audience. 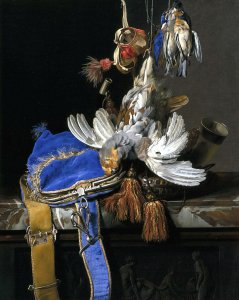 Fine ultramarine, sourced from Afghanistan, is also part of my own palette. Still expensive today, it is a truly amazing colour. Next time you see one of my paintings, look out for this beautiful blue! 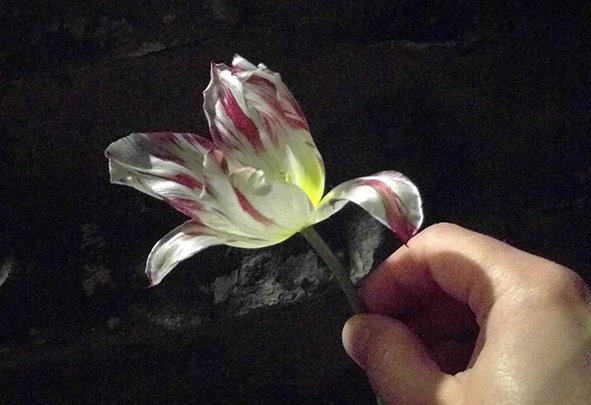 One of the latest Dutch heritage tulips to surface in my garden is also one of my favourites: the Zilver Standaard, a Dutch tulip which hails from 1760. It is part of my heritage tulip collection spanning the 16th to the 19th centuries – all sourced from the friendly conservation team at the Hortus Bulborum in Limmen, Holland.

It is a relatively strong tulip; stronger than the earlier 17th century cultivars. It has a yellow base and white petals which show red flames. Some tulips have more red flames, some fewer, so there is quite a variety within the same cultivar. While very beautiful, this cultivar should not be confused with the flamed tulips of the 1600s, which only showed the famous and popular ‘broken’ colour due to a mosaic virus. This, unknown at the time, weakened the tulip plant and eventually pushed it to extinction.

Only one broken 17th century Dutch tulip cultivar remains today: the Zomerschoon (1620). This tulip appears to have developed tolerance. I was able to get hold of a few Zomerschoon bulbs last year – the buds are now showing and I’ll show you a photo when, after 4 years of waiting for this tulip, I can finally paint it.