My paint box is one of my favourite things: I’ve managed to exclude any paint developed after 1700, so no cadmiums or synthetic ultramarine for me. I guess that makes me a purist – it’s interesting how you learn things about yourself after a number of decades. So, I have ended up with a palette containing colours 17th century Dutch painters had access to:

These colours are from a variety of sources: man-made (such as Lead white, Smalt), mineral/deposit (such as Lapis lazuli, Malachite and earth colours) and organic (made from berries such as Stil de grain, or sourced from ancient peat-containing soil such as Cassel Earth). Madder Lake is organic in origin and produced from the root of the madder plant (Rubia tinctorum). It is a beautiful, deep ruby-red.

Use throughout history
Madder lake has been in use since antiquity, as a textile dye and as a paint. It was found in Tutankhamun’s tomb and as a paint was especially popular in 15th and 16th century Holland, where it was one of the few bright paints available to painters. Examples can be seen in paintings by for example El Greco, Velazquez and Vermeer. It had to be used with caution though as the purpurin pigment in this paint (rather than the pseudo-purpurin and alizarin), is prone to fading if not used in a careful way: exposure to excessive light was to be  avoided. This was achieved by using Madder lake as a glaze or as a thick layer in relatively dark areas of a painting – and definitely no heavy mixing with white. Using this approach, madder lake is fairly permanent.

As a transparent paint madder lake is ideal for glazing. It was traditionally paired with vermillion: brushed over this as an unbroken glaze results in a brilliant deepened red. Vermeer was known to use this technique, and we can see this today in his paintings Girl with a Red Hat, Girl with a Wine Glass and, famously,  Girl with a Pearl Earring where he used madder lake to paint those lips: 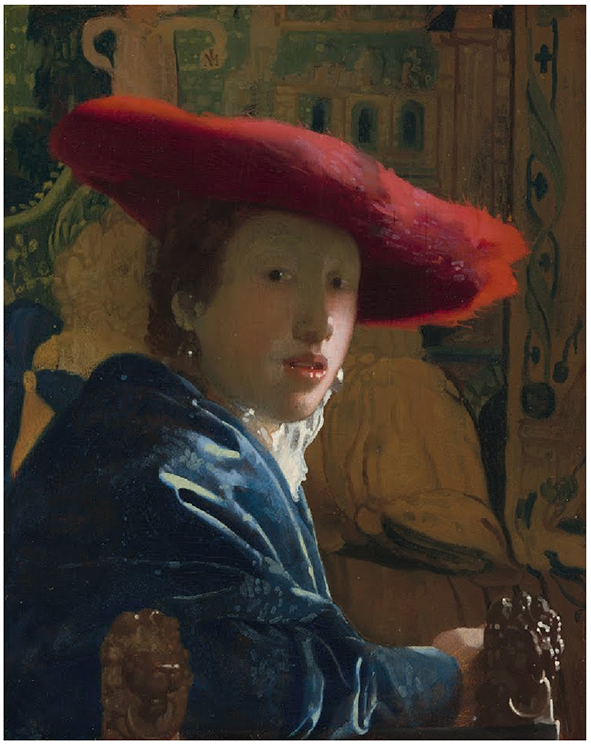 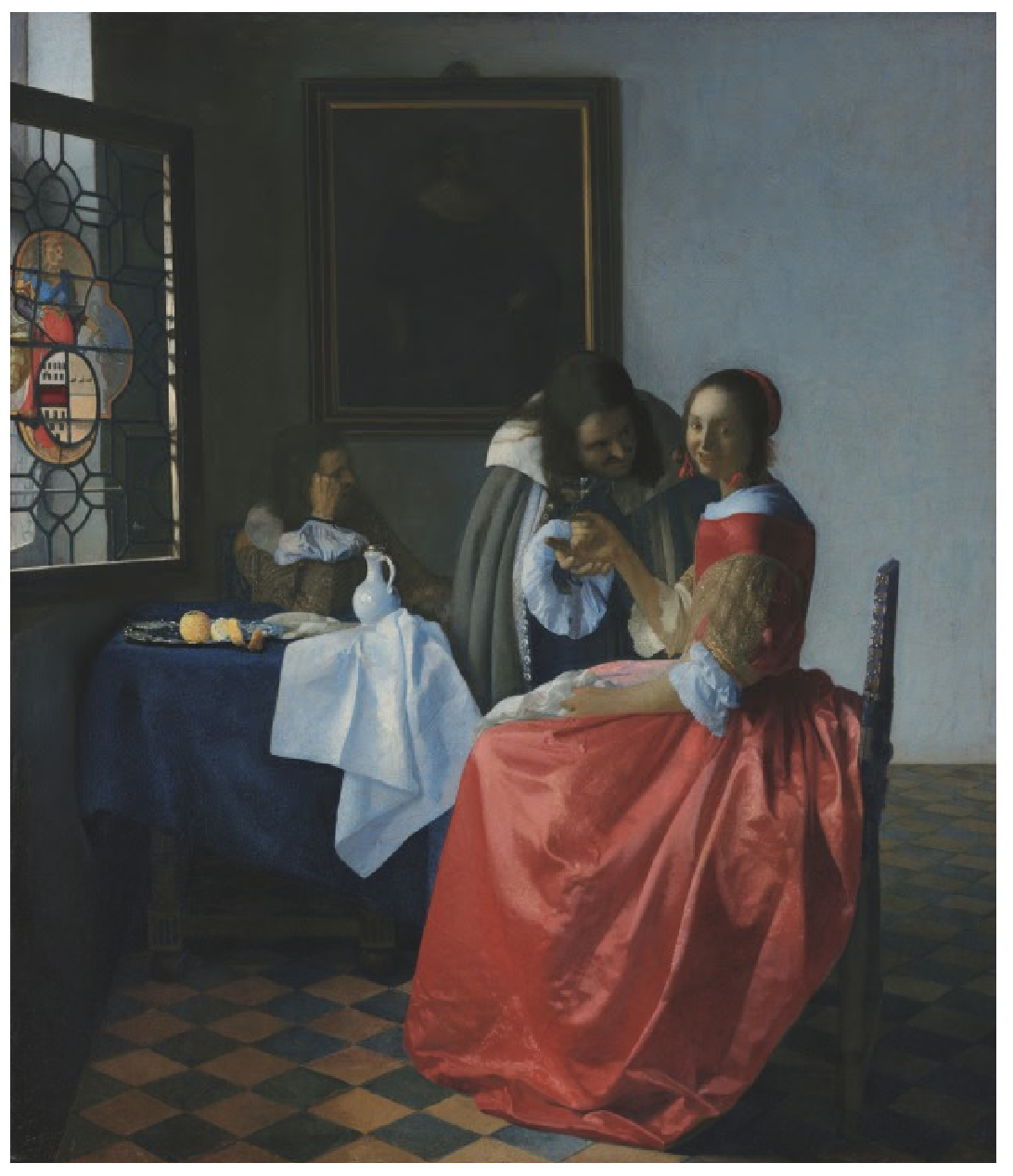 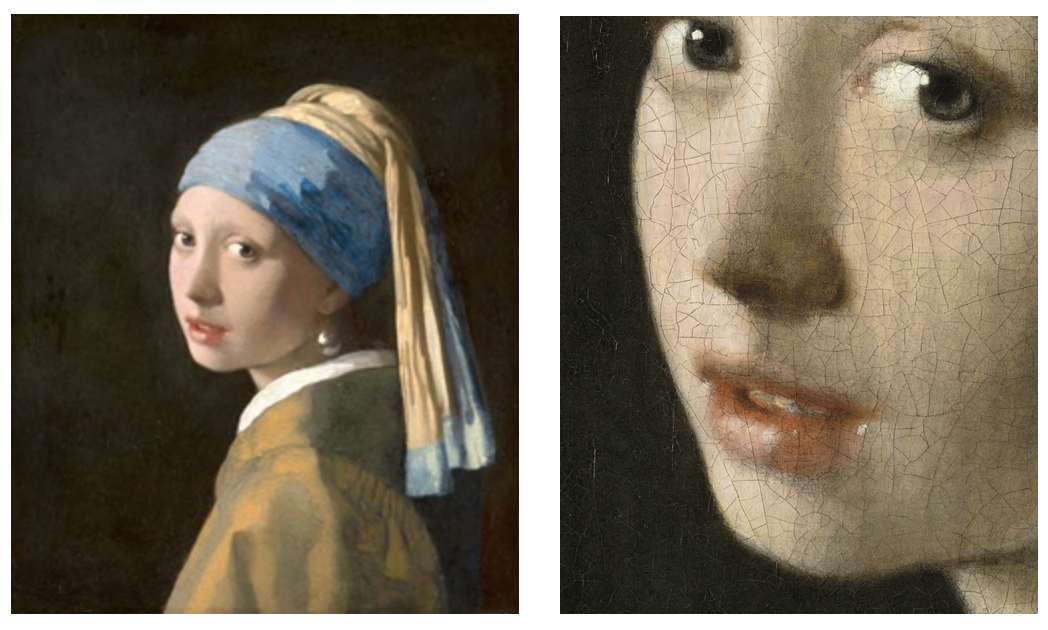 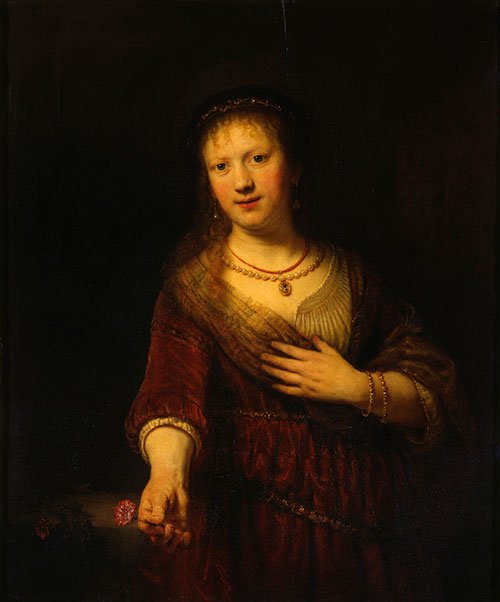 I exclusively use pigments that were available to the 17th century Dutch painter – something that fascinates me and also keeps me tied to my roots now I’m living abroad. I use 17th century techniques and my subject matter is a nod to the interests of that time, including heritage tulips, fruit and produce still life, and bird still life. In this old pigments painting blog you’ll read more about one of the pigments I use: Vandyke Brown, also known as Cassel Earth and Cologne Earth. It has featured on artists’ palettes since 1600 and most likely earlier.

The pigment Vandyke Brown / Cassel Earth / Cologne Earth has an interesting and centuries’ old history. It was used to create deep, dark, rich backgrounds. When we think of Dutch paintings of that time, these typical backgrounds immediately come to mind.

Old pigments, in contrast to most modern ones (meaning paint developed from the 19th century onwards, such as synthetic ultramarine), need to be used with extra caution. Some are toxic (such as lead white and vermillion), some react with other pigments (e.g., lead white and orpiment) or painting medium, and some are fugitive / not lightfast (such as the organic lakes). There are many other things to consider, and throughout the centuries artists and craftsmen were aware of these (and if not, extensive modern research has revealed a lot!). Contemporary manuscripts and published handbooks by artists, potters and glass craftsmen have been a valuable source for artists since the mid-1500s. Some, for example “De Groote Waereld in ‘t kleen geschildert” by Willem Beurs (1692), survive today and are accessible thanks to digitisation. 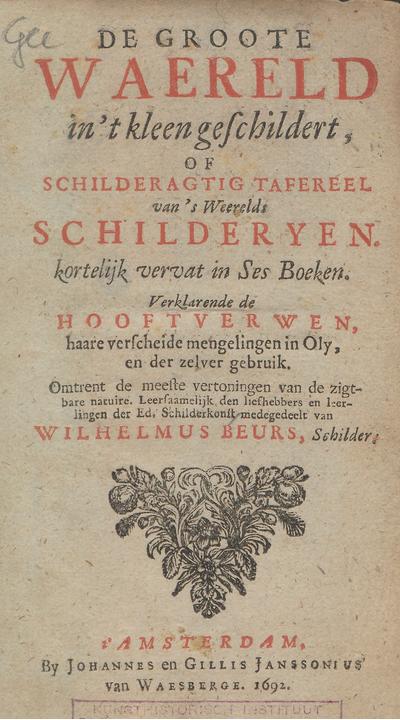 Without conducting a thorough literature review, some of the information for the short essay below has been lifted from manuscripts by Beurs 1692, Feller and Johnston-Feller 1997 (National Gallery of Art, Washington), Van Eikema et al. 1999 (Rijksmuseum, Amsterdam), the Pigment Database (artiscreation.com) and ColourLex (colourlex.com).

Old pigments: what is Vandyke Brown?

Vandyke Brown, now synonymous with Cassel Earth and Cologne Earth, is comprised of the humic/lignitic substances found in soil, peat and brow coal; as an ancient deposit it contains microfossils and angiosperm pollen. Chemically, iron is most abundant followed by calcium and some manganese. Throughout history the main deposits were found in the west-German regions of Cologne and Kassel (today the material is sourced from Kassel). The pigment was prepared by drying and grinding the raw material, and then mixing with linseed, walnut or poppyseed oil for oil painting. It has a beautiful, deep black-brown colour and depending on the thickness of the painted layer, can have violet undertones. 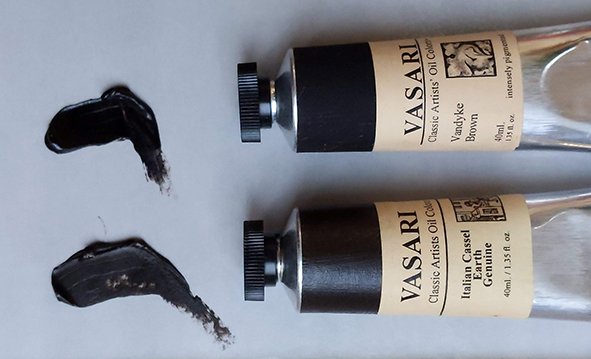 My Vandyke Brown and Cassel Earth (both NBr8) 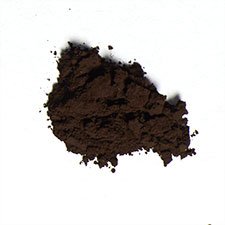 Cassel / Cologne Earth is commonly thought to have been used by Anthony van Dyck (1599-1641). Born in Antwerp, Van Dyck became a leading court painter in England and is still famous today: his paintings are in major museum collections. Likely due to his fame, Cassel / Cologne Earth is also known as Vandyke Brown (with this particular spelling adopted). Interestingly, this pigment was not associated with Van Dyck until approximately 1794, more than a century after he painted.

Cassel / Cologne Earth is thought to have been in use since the Renaissance period and mainly in Holland and England. Unfortunately, due to the difficulty identifying organic materials using modern analytical methods, the use of this pigment can only be suspected in a number of paintings. The earliest date Cassel / Cologne Earth may have been used is during the early 1500s: an organic brown pigment was found in two paintings of 1500 to 1511 attributed to Gerard David (circa 1460-1523). Organic brown pigment was also found in paintings by Velazquez (1465-1524).

Handbooks and literature of the 17th century include recommendations for its use, confirming that it was part of painters’ palettes in that century. Karel van Mander, in his Het Schilder-Boeck (1604) recommends Cologne Earth for the shadows ‘of the flesh’ and Willem Beurs mentions Cologne Earth in his De Groote Waereld in ‘t kleen geschildert  (1692).

How was Cassel / Cologne Earth used and how do I use it?

The pigment was used in oil painting, mainly as a glaze over dark areas, and in later centuries in watercolour. It was not restricted to fine art: it was used on sculptures, walls, wall and decorative papers, in woodworking and even put in snuff!

A recipe by the celebrated painter Jan Davidsz. de Heem (1606-1683/4) survives, in which he recommends a mixture of lead white, lake, bice and earth of “colon” for painting the yeast residue on grapes and other fruit: 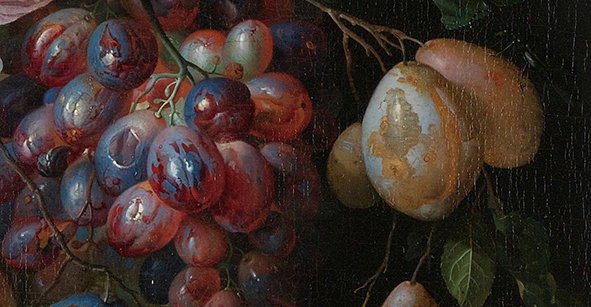 Rubens (1577-1640) is known to have included the pigment on his palette: he mixed it with ochre, creating a warm transparent brown which ‘held up well, particularly in resin varnish’. Van Dyck was Rubens’s pupil and collaborated on a number of paintings with him, so Cassel / Cologne Earth may have entered his palette at that time.

Now I’ve added Cassel Earth to my own palette, I’ve been using it in my backgrounds as well. Below is a painting of a Cornish shell; the background, a layer of Cyprus umber, was glazed with Cassel / Cologne Earth to create a deep and dark background bringing out the shell. 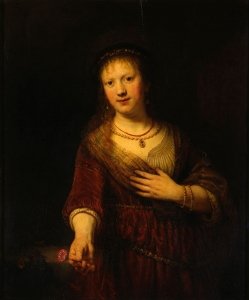 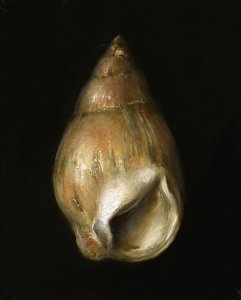 Cornish Shell. I used Cassel Earth (NBr8) as a glaze over an umber background.

Vandyke Brown has not always been synonymous with Cassel and Cologne Earth: throughout the centuries a variety of substances such as inorganic iron and earth pigments including umbers and ochres were often referred to as Vandyke Brown. These pigments were distinct from the organic, humic substance sourced from Kassel and Cologne. In France, Vandyke Brown was not considered the humic pigment but an inorganic iron oxide. Calcined (heated) ochres were also referred to as Vandyke brown at times. On the other hand, elsewhere in Europe Vandyke Brown was known as the humic pigment. Early / contemporary literature was not helpful in resolving the confusion!
The confusion between inorganic and organic-humic pigments has had consequences for the perceived permanence (lightfastness) of the pigment that is being used. True Cassel/Cologne Earth is listed as Natural Brown 8 (NBr8) in the Colour Index (1956). The organic component is vulnerable to oxidation, facilitated by light. As this results in fading, NBr8 is considered only moderately lightfast. Perhaps aware of this tendency to fade, painters in the 1600s therefore had a specific way of working with this pigment: glazing over dark areas. On the other hand, inorganic ocherous/umbrous or iron-oxide-based pigment is not subject to fading and is therefore very lightfast.

Today, due to the moderate lightfastness of NBr8, genuine NBr8 paint is sadly no longer widely available to artists, except via the fine art materials manufacturer Vasari (USA). Instead, most manufacturers use PBr8: an inorganic pigment that mainly contains manganic hydroxide and is mostly synthetic. Unfortunately, they all claim to be genuine Vandyke Brown – suggesting that the centuries’ old confusion between organic and inorganic Vandyke Brown may be alive and kicking today.One modern study on the lightfastness of NBr8 supported by The National Gallery of Art, Washington, has shown that discolouration of NBr8 may occur after an equivalent of 20-100 years exposure to museum lighting, confirming that the pigment is of intermediate light stability (Feller and Johnston-Feller, 1997). In this experiment NBr8 was glazed directly onto a bright background before exposure to light, thereby allowing more light reflection than would have been the case if NBr8 was glazed onto a dark background – the traditional 17th century method of working with this pigment. This modern conclusion of lightfastness may therefore not reflect the fate of this pigment used in the 1600s. Unfortunately this does not change anyone’s mind and most artists don’t look further than PBr8. This is a shame as the depth of colour and magic of this early pigment, and the other old pigments, is unparalleled in modern colours.

In the abovementioned experiment the authors note that NBr8 slowly discolours from a deep brown to a golden brown, similar to areas of some paintings by for example Rembrandt. Rembrandt might not have intended this, however do we, in the 21st century, think that this is such a disaster? Or, having most likely been aware of contemporary experience, did he intend some of his backgrounds to turn golden brown, using the pigment’s weakness to his advantage? We’ll never know.
I have proudly added NBr8 to my palette and I’m well aware of the moderate lightfastness of my NBr8 Cassel Earth. I’m using it with caution and as a glaze over dark backgrounds – the 17th century way. As with all old pigments, old manuscripts as well as modern research provide insight and therefore the power to use these colours with caution. I find that it is precisely these ‘temperamental’ characteristics that make these traditional pigments such a joy to work with. Their rich history and tradition also draws me – as if I hold a little bit of the 17th century in my hand.
Stay tuned for the next old pigments painting blog!